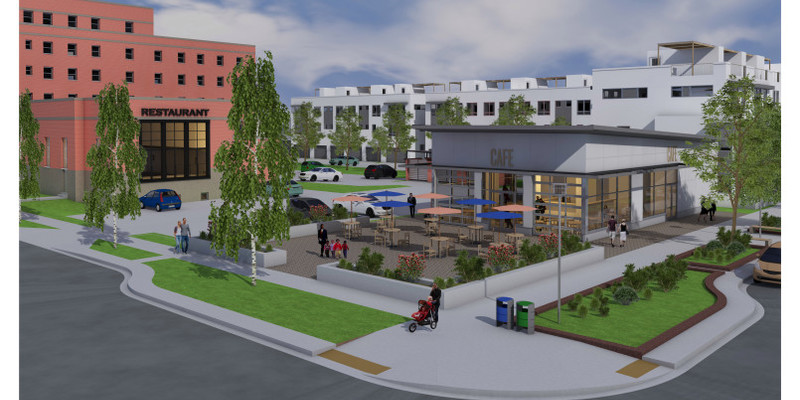 Plans call for the Kuhlman building on the former St. Anthony Hospital campus to be converted into 49 affordable apartments

The final piece of the old St. Anthony Hospital campus redevelopment — the block that contains the historic Kuhlman Building — is under contract and could soon become home to a mix of affordable apartments, market-rate townhomes, restaurants and retail.

Denver developers Koelbel and Co. and Trailbreak Partners are teaming up on the project, which will span the block bounded by West 16th and 17th avenues, Perry and Quitman streets.

Plans call for the adaptive reuse of the Kuhlman Building into 49 permanently affordable rental units for households earning up to 60 percent of area median income. The attached gymnasium would be transformed into a retail/restaurant space.

The balance of the block would be devoted to new construction: 25 to 27 market-rate, for-sale row homes would line 16th, 17th and Quitman, with a 4,300-square-foot public plaza and 2,200-square-foot cafe anchoring the corner at 17th and Perry.

“The vision is really trying to create a mixed-use, mixed-income project on Block 3 that integrates into the larger St. Anthony redevelopment and is also mindful of its existing neighbors to the east,” said Doug Elenowitz, principal at Trailbreak Partners.

Developers plan to formally unveil their plans for the block, known as Block 3 within the larger Sloans redevelopment, at a community meeting Wednesday.

Elenowitz’s ties to the St. Anthony’s redevelopment go way back — he was executive vice president of EnviroFinance Group when the Denver brownfield developer purchased the old hospital campus back in 2013.

He jumped on the opportunity to get involved again with his new venture, Trailbreak Partners, reaching out to Koelbel after another developer’s proposal to convert the Kuhlman Building into a boutique hotel failed to pan out.

Over the years, the five-story brick building has served as a nunnery, a nursing school and dormitory, and administrative offices for the hospital, Elenowitz said.

Converting the Kuhlman Building into a mix of studio, one- and two-bedroom apartments will require gutting the interior but only minor changes to the building’s exterior aesthetic, said Carl Koelbel,  vice president of Koelbel and Co., which has experience developing affordable housing, townhomes and retail.

“The great thing about the building is it’s got really good bones. The structure is very, very sound,” Koelbel said.  “It was an important piece to the community that it remain largely as it is and we intend to do that.”

Funding for the project will come from a combination of developer equity, federal low-income housing tax credits, tax-increment financing from Denver Urban Renewal Authority and a performance loan from the Denver Office of Economic Development.

The terms of the TIF package have not yet been finalized. From the very beginning, though, it was understood that Block 3 would likely require TIF assistance given the desire to save the Kuhlman building, DURA executive director Tracy Huggins said.

“We went in knowing those two blocks in particular would likely need our assistance,” Huggins said.

DURA hopes to have the TIF proposal before the Denver City Council for approval early next year, she said.

Along with a 175-unit senior housing project expected to begin construction next year at West Colfax and Quitman, the Kuhlman Building will round out Sloans’ on-site affordable housing component, said Cameron Bertron, executive vice president of EnviroFinance Group.

“Between those two projects, we get to just north of 20 percent affordable,” Bertron said.

The remainder of the redevelopment’s for-sale and rental housing is market rate, with condos in the 12-story Lakehouse tower climbing up past the $1 million mark.

When EFG put the Kuhlman block back on the market, potential developers were required to include affordable housing, Bertron said.

“This seems to be a really good fit, a project that will move forward with a mix of incomes, for rent and for sale and residential and commercial,” he said.

To qualify for Kuhlman’s income-restricted apartments, a one-person household could earn up to $33,660 and a family of four up to $48,060, according to 2016 figures. The block’s affordable housing is expected to be completed by early 2018.

“This is going to be a beautiful, brand new development in the Kuhlman Building, professionally managed and run. From an operational standpoint, there should be very little difference from being adjacent to a new apartment building,” Elenowitz said. “A sustainable neighborhood represents housing product and incomes of a variety of different levels.”