KUH unveils CityHomes at Boulevard One 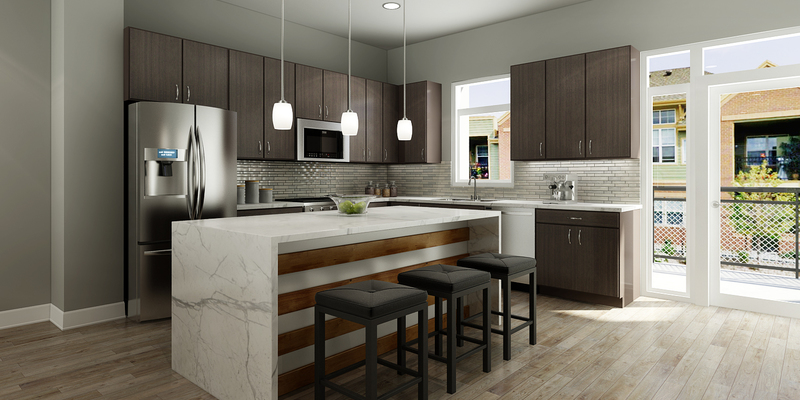 He began acquiring ground around Lowry almost four decades ago, when it was still an Air Force Base to create the Breakers Resort, a 1,523-unit apartment community on 190 acres anchored by a 60-acre, private lake.

Koelbel and his institutional partner recently sold the Breakers for a record $350 million, although his privately held company, Koelbel & Co., still retains a minority interest.

“When we first started acquiring land for the Breakers in the late 1970s, Lowry was kind of a big barrier to development,” Koelbel recalled.

“It was a large enough piece of land that it kind of created an interruption to the orderly process of development and traffic,” he said.

Still, many feared that closing the base would hurt the local economy, as it had been the experience of many towns and cities across the U.S.

Even Rep. Pat Schroeder, D-Denver, voted against the closing.

“Based on attending ULI (Urban Land Institute) meetings for the past 20 or 30 years, and my involvement with the Breakers, I would have to say the decommissioning the military base at Lowry was a great decision,” Koelbel said.

“How they ultimately executed the redevelopment of Lowry into a mixed-use development where people can live, work and play, is the absolute pinnacle of what could and should happen with a base closure,” he said.

Now, a division of his family-owned company, Koelbel Urban Homes, is playing a key role in the final development parcel in Lowry

KUH is finishing the construction of 35 luxury rowhomes in Boulevard One at Lowry. Boulevard One is a 70-acre site at Quebec Street and Lowry Boulevard.

The three-story buildings are designed by Michael Noda, principal of Neo Studio Architects.

Depending on the model, units have 3 to 5 bedrooms, plus lofts.

The Lowry Redevelopment Authority is requiring all of the new homes in Boulevard One to have HERS index scores of 50 or less. With HERS, the lower the score the better it is, for energy.

“We’re also putting in solar as a standard feature in every unit,” said Peter Benson, a senior vice president at KUH.

“Some builders put in leased solar panels, but that can cause problems for homeowners when they want to sell,” he said.

“We are buying them outright,” he said.

Most of the buyers so far have come from nearby neighborhoods, such as Crestmoor Park, he said. One couple planned to buy a home in Stapleton, but chose CityHomes at Boulevard One instead.

“Some of them have homes to sell, but none of them need to sell to buy one of our units,” Benson said.

“They have all owned homes before. Many of them have built custom homes in the past.”

He noted that the homes are too expensive to draw many millennials.

“We’re not really going after the millennial market at this price point,” he said.

“We’re fortunate to have a bit of a rarified buyer pool who can afford homes in price range,” Benson said.

These are the biggest homes in the final phase of Lowry, he said, although East West Partners is building units almost as large, he said.

The first units will open in January.

Carl Koelbel, Buz’s son, who has been instrumental in creating KUH to focus on development in infill urban areas, agrees with his father that Lowry has a lot going for for it

“I think its location is a big benefit,” Carl Koelbel said.

“Lowry is very walkable and has easy access to to Cherry Creek, but without Cherry Creek prices,” he said.

“It also provides an easy commute to downtown and the Denver Tech Center, without the congestion, noise and parking problems you face in downtown,” he added.

Neo Studio Architects has done a great job with the homes, he said.

“When we first got started, we stepped back and looked at the traditional forms that make rowhomes and brownstones really appealing,” Koelbel said.

One of the traditional features is raised entryways, of course.

“We added a contemporary flourish along with the classic design to create this great rhythm to each building,” he said.

“They really have this great feel,” Koelbel said.

“And with the master bedrooms on the main floor, it gives you a feeling of very spacious and very open row homes,” he said.

In total, Boulevard One will include:

Buz Koelbel is thrilled to be participating in the last phase of Lowry.

“I truly feel like I have seen Lowry come full circle,” he said.

“I’m honored and excited that we are part of which really is the last piece of the Lowry puzzle.”